Two days in Vilnius. After a lovely bite of breakfast in one of the centre’s many cosy cafes, you’re all ready to collect some new experiences. With two days in Vilnius, you’ll not only get to know the sights, from the city’s charming UNESCO listed Old Town, to its numerous postcard perfect Baroque churches, and everything in between. You’ll also have time to check out some museums.

This temple is a symbol of the Christianization of Lithuania. The Cathedral Basilica of St Stanislaus and St Ladislaus of Vilnius was built in the very centre of the city, on the site of a former pagan temple. Standing next to the city's defensive castle, the Cathedral has survived the most celebrated and dramatic events in the history of Vilnius and Lithuania.

The Cathedral has been rebuilt several times over the centuries, attracting the talents of famous local and international architects and artists. The present building is in the Classicism style (created by the architect Laurynas Stuoka-Gucevičius), although its walls contain traces of Gothic, Renaissance and Baroque architecture. Palace of the Grand Dukes of Lithuania

Opened in 2013, The Residence of the Grand Dukes of Lithuania is a modern imagining of the original castle that stood on the site from the second half of the 13h century. This building, the so-called “Lower Castle”, was the seat of successive Lithuanian Grand Dukes, beginning with the Gediminid dynasty. The middle of the 17th century saw its untimely destruction at the hands of the marauding Russian army.

Visually, the modern incarnation of the Palace of the Grand Dukes is a novel potpourri of architecture styles. This reflects the original building, which assumed a number of successive architectural styles in its lifetime, from the Gothic to the Renaissance.

The building’s many grand and spacious rooms now play host to concerts and exhibitions all year round. 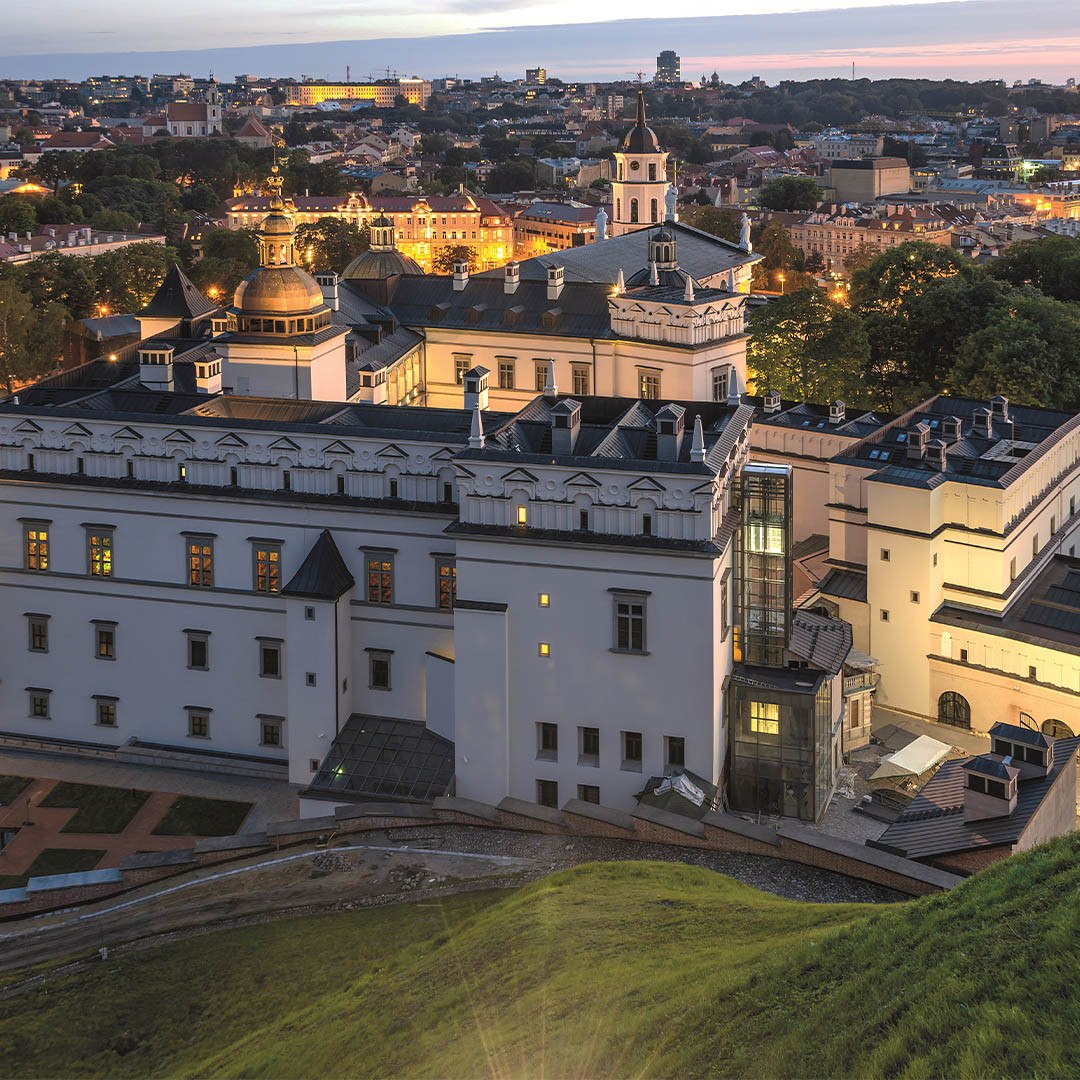 Situated in the heart of Vilnius, between the city’s iconic Gediminas Hill, the Vilnelė River and the Bernardine Monastery, Bernardine Gardens is one of the city’s most popular parks. With its botanical garden, rose garden and monumental fountain, it is the perfect place to unwind after a day exploring the winding side streets of the Old Town. And for arboreal enthusiasts, the park is home to the oldest oak tree in Vilnius, which is approximately 400 years old. The Republic of Užupis

Užupis may be the smallest district in Vilnius, but what it lacks in size it makes up for in style and character. Nestled on the banks of the Vilnelė River, the area is a hive of creativity and eccentricity, attracting the city’s artists, intellectuals and entrepreneurs. The spirit of the district is best embodied by its constitution, a somewhat ironic list of ordinances that is displayed on the walls as you enter. Sometimes compared to Montmartre in Paris or Freetown Christiania in Copenhagen, it is one of the oldest districts of Vilnius.

A turn down one of Užupis’ cute backstreets will find you in the workshops of one of the area’s many artisans, where you’ll be able to purchase some art, or even have a go yourself. You’ll also find that the area is also rich in quirky boho bars, eateries and cafes, so it’s the perfect destination for a leisurely lunch, dinner or supper.

You can’t leave Užupis without a visit to its resident angel. You’ll find her in the square, normally surrounded by tourists or locals enjoying a takeaway coffee from one of the nearby cafes. 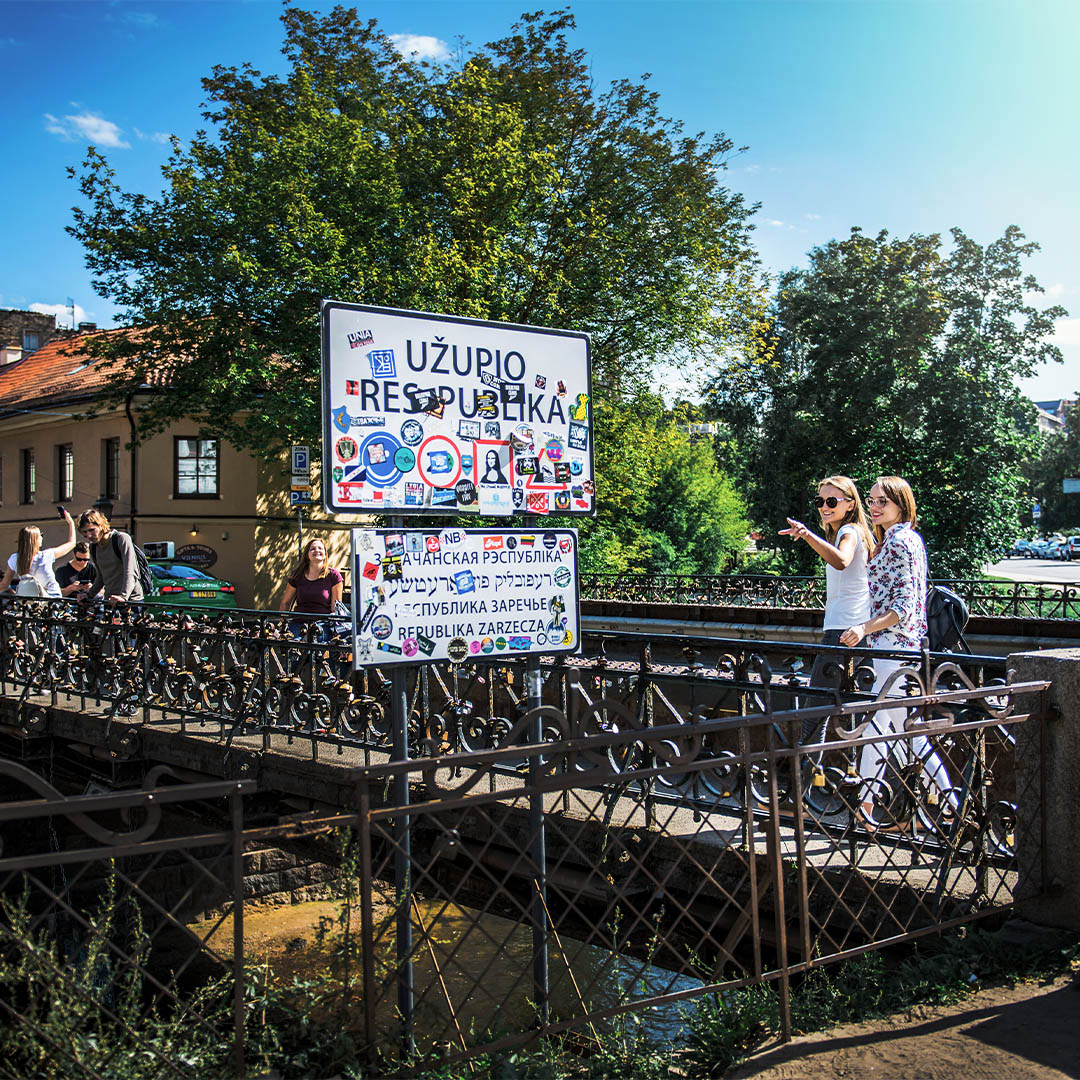 This church, which has remained almost unchanged for five centuries, is one of the most beautiful and probably the most famous buildings in Vilnius. It is a masterpiece of the late Gothic style, wrapped in many enigmatic legends. The most famous of which is that upon seeing St. Anne's Church, Napoleon Bonaparte expressed a desire to take the building back to Paris on the palm of his hand. 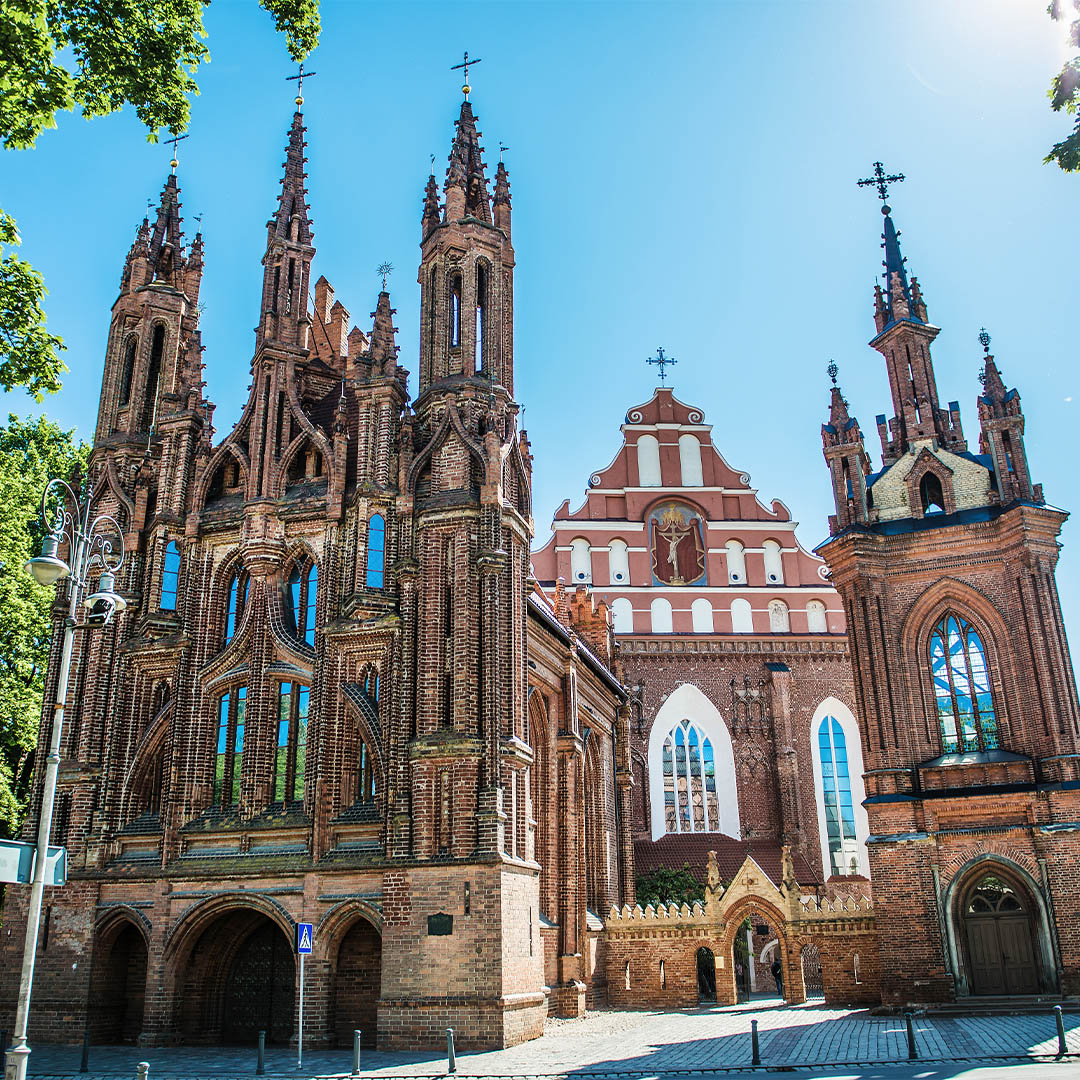 Rumoured to be named in honour of Adomas Mickevičius, the famous 19th century poet who lived there, Literatai Street is a popular draw for foreign tourists and Lithuanians alike. What attracts the crowds are the unique works of art that decorate the street’s walls. Composed from wood, metal and glass, each individual piece refers to the work of a famous author. This is the perfect spot for any self respecting fan of literature or poetry. You might even find yourself getting inspired. 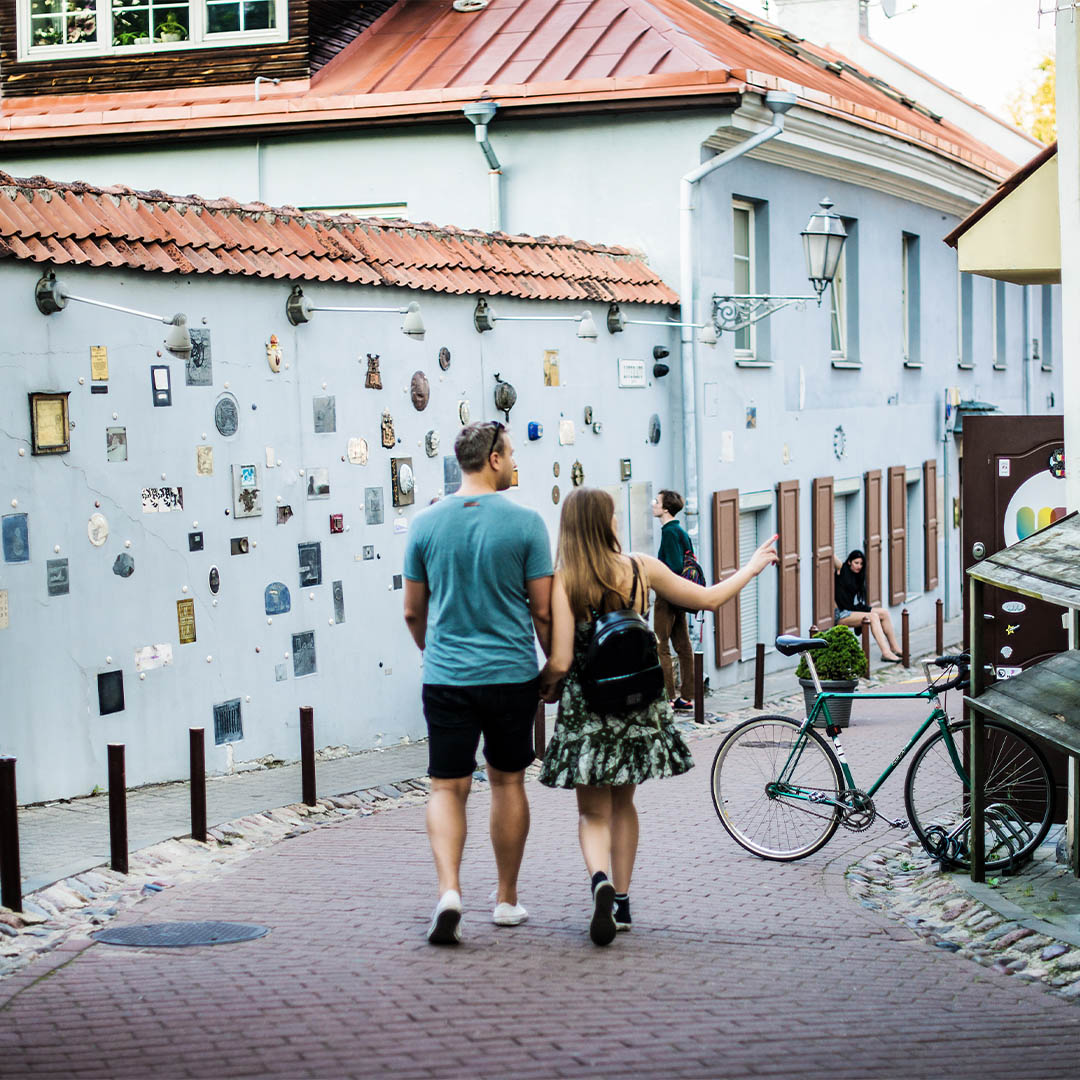 Pilies Street is the oldest and most ornate street in the old town of Vilnius. Originally part of the road that led from Vilnius Castle in the south towards Poland and Russia, it is now the city’s main tourist thoroughfare. Apart from its central location, the street’s main draw is its eclectic mixture of architectural styles. Both number 12 and number 14 Pilies Street are great examples of the Gothic style, while number 4 is a Renaissance Chapter House. And let’s not forget the Baroque pediment of the Church of. Johns. So, just a short stroll up the street and you’ve already travelled a few hundred years worth of architectural history.

And Pilies Street is also a perfect place for a spot of lunch. Home to a number of small restaurants, delicatessens and coffee shops, you’ll be spoilt for choice. 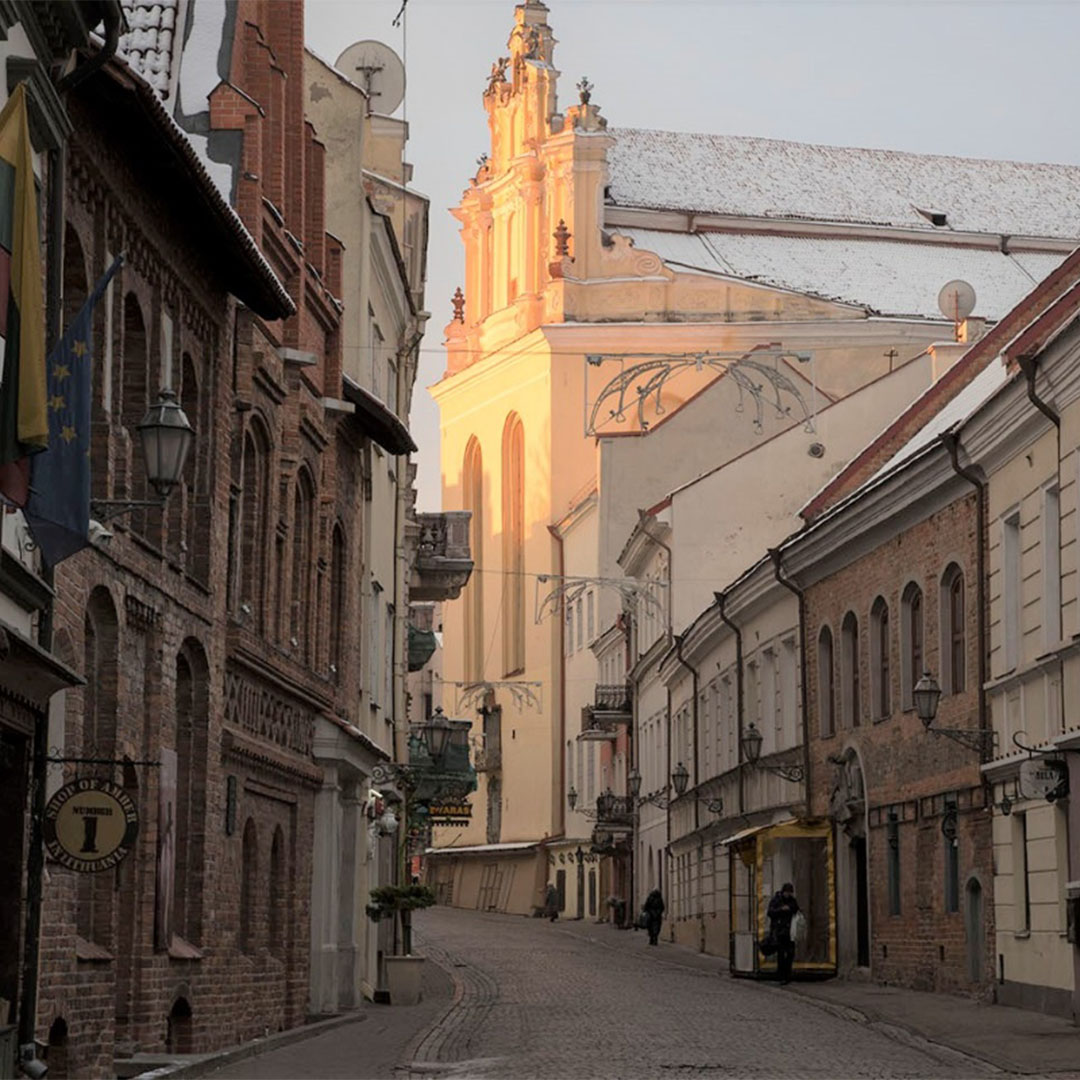 For 115 years, Lukiškės Prison was protected by high walls and barbed wire. Nowadays, however, this historical prison has been transformed into the artistic space Lukiškės Prison 2.0, where over 250 artists and creators are now working. Various events, concerts, and performances are held there. It’s also become a lure for the city’s visitors, who can learn more about life in the prison and its stories from the guided tours that the prison offers. This special place has also drawn the attention of world film makers – Lukiškės Prison was a filming location for season 4 of the blockbuster Netflix TV series Stranger Things. 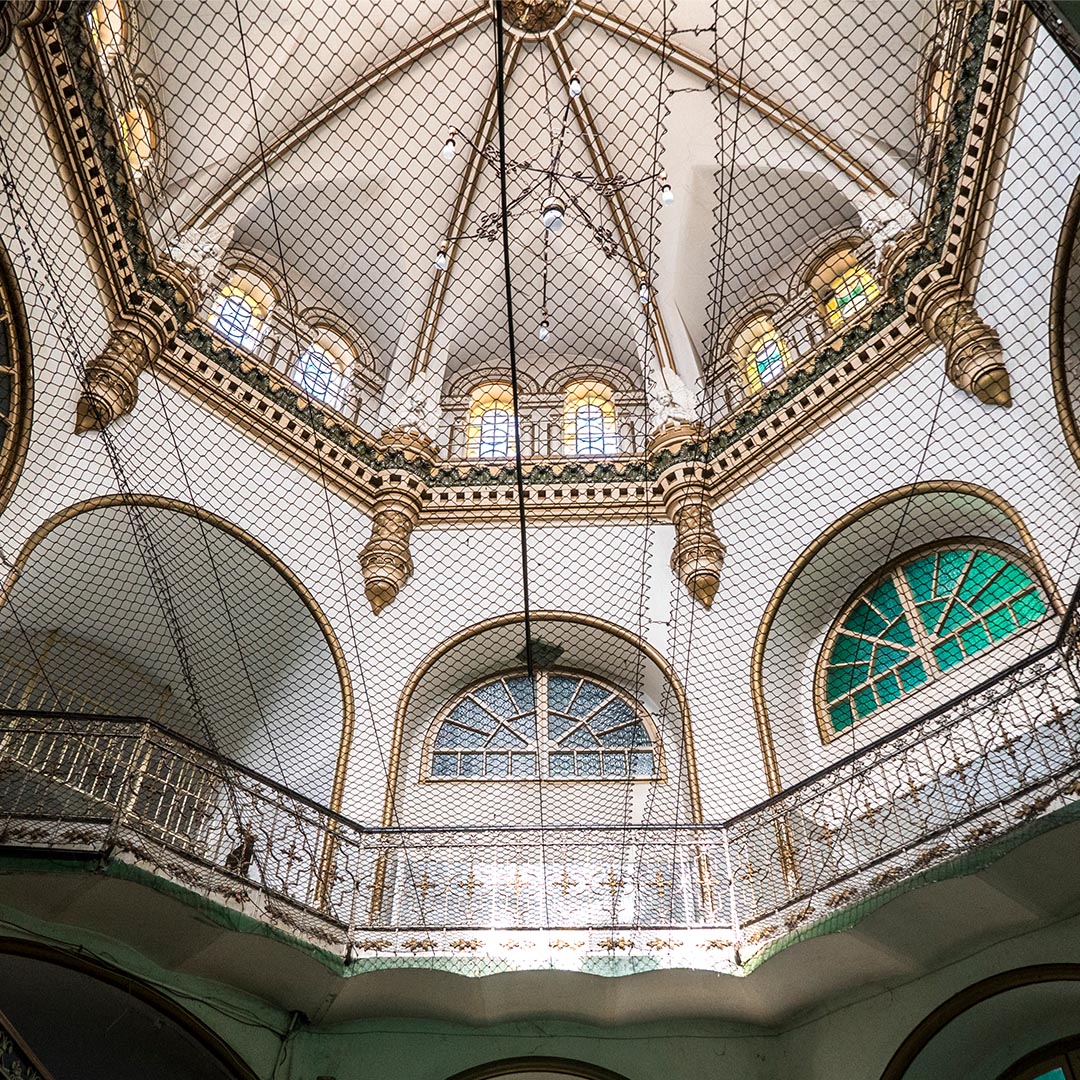 Originally a Jewish neighbourhood of goldsmiths, glassblowers, artisans and financiers, this area located between the M. Antokolskio, Gaono, and Žydų streets in the city’s old town became the Glass Quarter in 2018. Now home to a community of boutique owners, jewellers, designers and cafe owners, the Glass Quarter has become synonymous with style and a flair for the fantastic. In fact, during festival times like Christmas and Halloween, you’ll find the streets festooned with lights and decoration. A great place for shopping, or browsing, or cafe hopping, you’ll have the chance to enjoy a luxurious champagne and cake experience under a ceiling of rose petals. The Glass Quarter is a must visit. 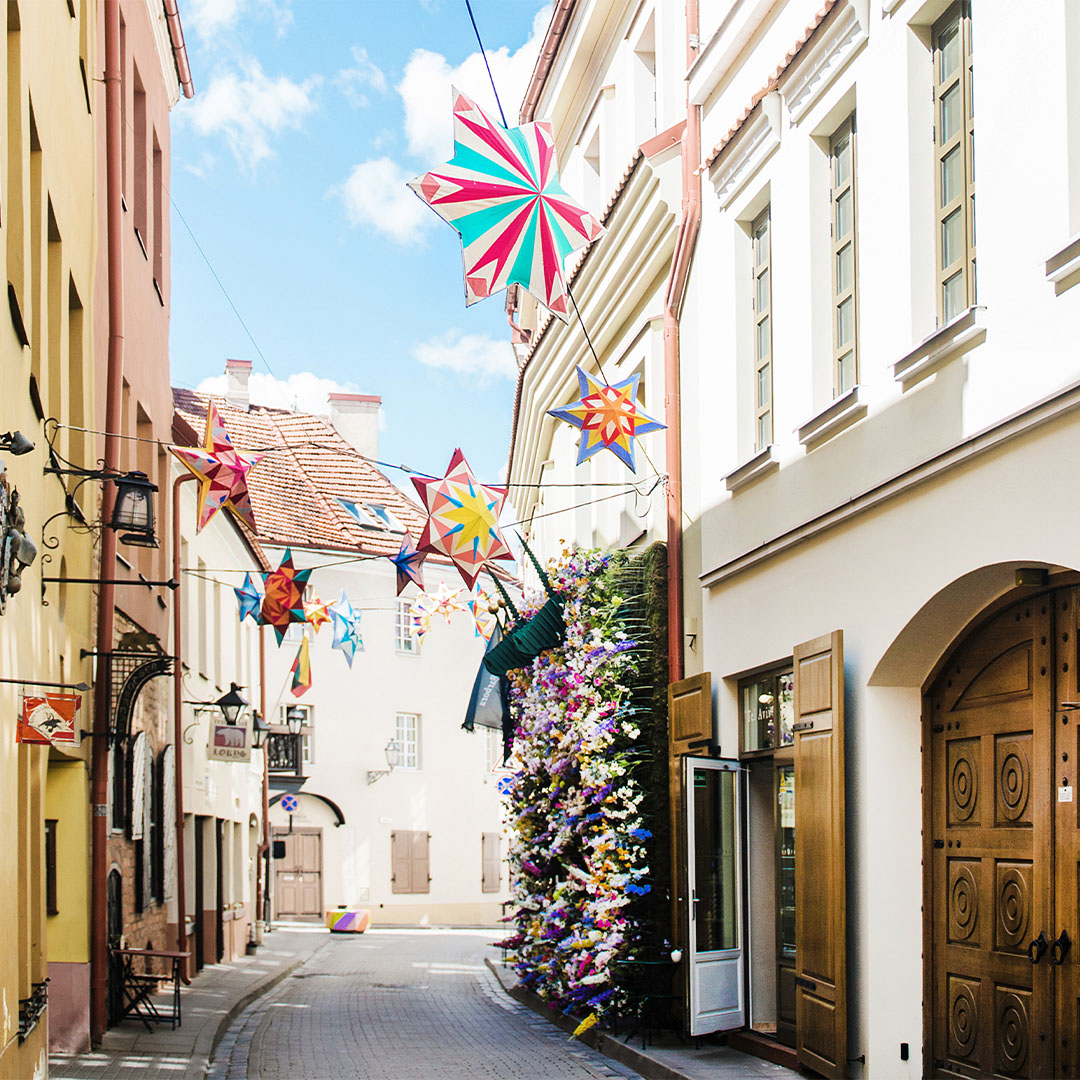 Once you’ve taken in the culture and sights of the Glass Quarter, the next stop on your itinerary should be the Town Hall Square. Regularly home to the city’s most important fairs, events and concerts, there’s every chance that a trip there will find you in the vortex of the action. You might not get a chance to see the bears that the square was famous for in medieval times, but there’s sure to be enough happening to keep you occupied. Positioned between two busy pedestrian streets, the Square is also a great place to do some people watching. 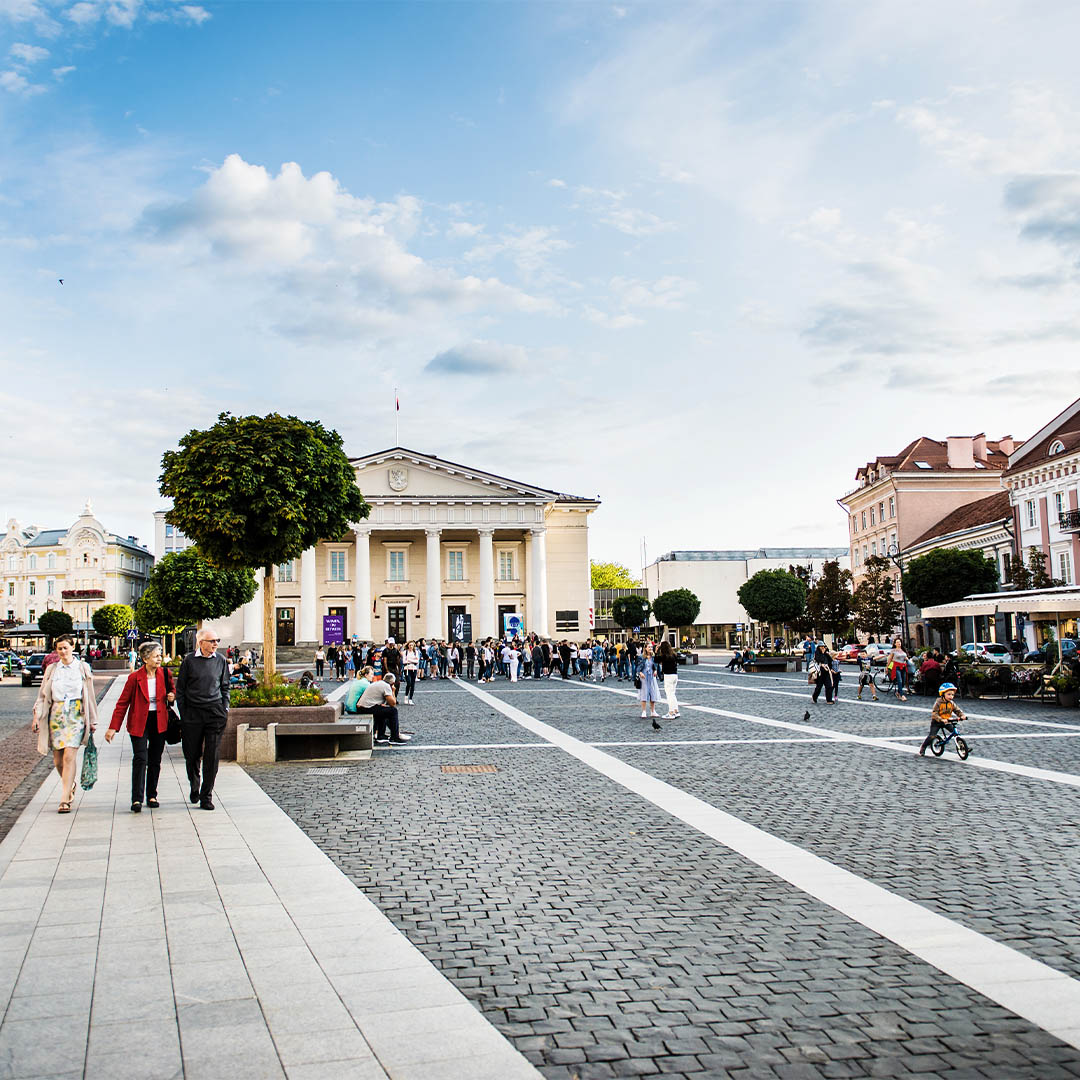 Start your second day at one of the city’s most famous sites of pilgrimage, The Gates of Dawn. Completed in 1522, it is the only remaining gate of the city’s original defensive walls. As was tradition at the time, an icon of the Sacred Mother was placed above the gate to provide protection for the city. The current icon, an example of the rarer tradition of Black Madonnas, was housed in a specially built chapel above the gate in 1706. The painting is believed to possess mystical healing powers, and is a site of pilgrimage for both the Catholic and Orthodox faiths. Indeed, the Gate has such cultural significance that it even remained through many decades of Soviet occupation. 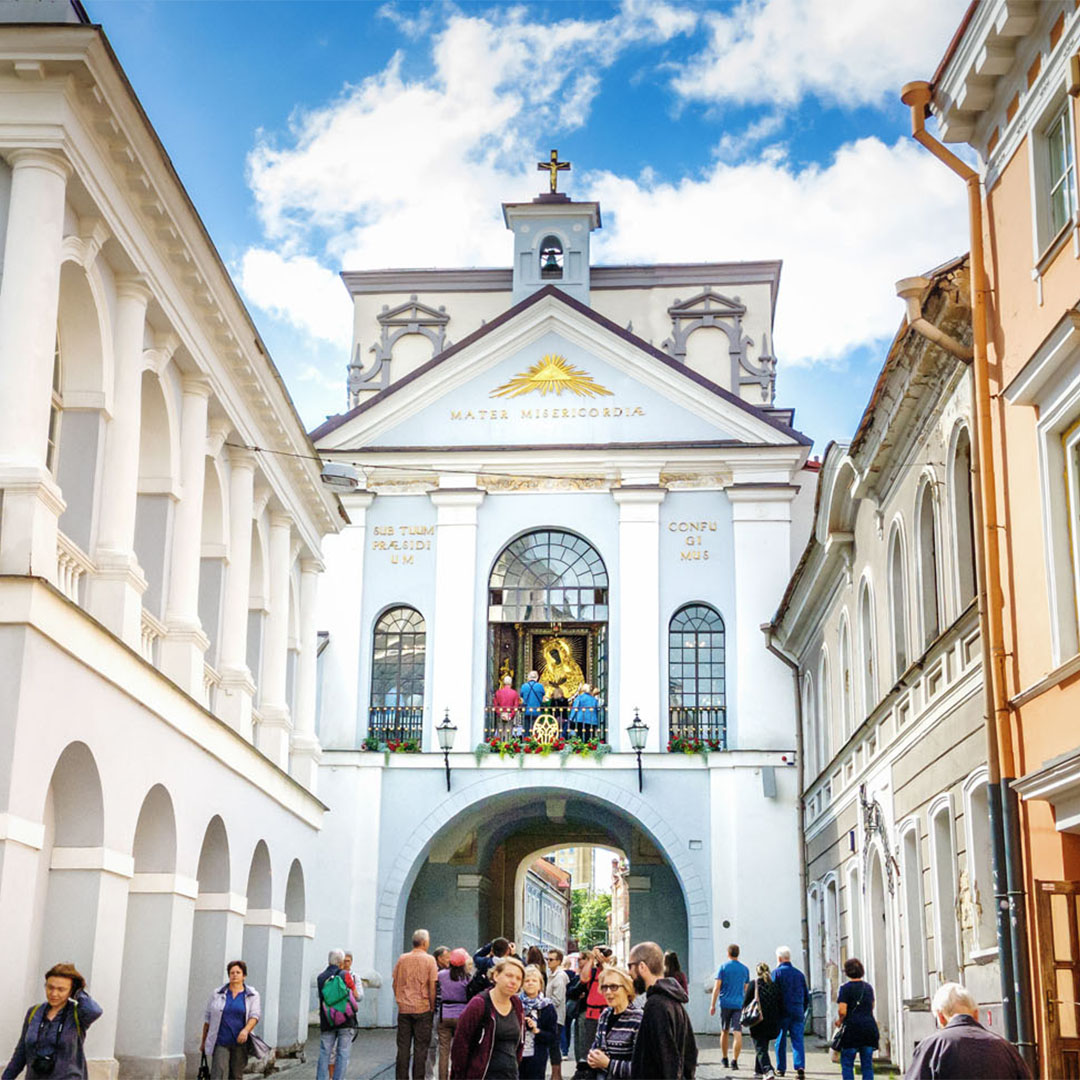 Looking to get a real taste of the city? To hear the local lingo at its sing-song best? Then there is no place better than Vilnius’ oldest indoor market - Halė Market. After some local delicacies like lašiniai - cured pork fat, or kastinys - a local garlic cheese spread? You’ll find it here. Then there’s honey fresh from the hive, apples from your grandmother’s orchard, and homemade sauerkraut. And let’s not forget the local curd cheese, varškė - a staple of the Lithuanian breakfast table. A trip around the market is pretty much a crash course in Lithuanian cuisine. Not only that, you’ll get a real feel for the locals themselves as they banter and barter in amongst the stalls. And if you start to build up a hunger, the market contains a lot of specialist bistro booths and bars. Designed by architectural wunderkind Daniel Libeskind, the MO Museum is the city’s newest jewel. Its award winning structure is a real eye opener both inside and outside. In fact, the museum’s central staircase, modelled after a DNA sequence, has become a popular site for instagrammers. But it’s not about the building - focusing primarily on contemporary art, the museum hosts a number of exhibitions throughout the year that highlight the best in Lithuanian and Baltic art. The (KGB) Museum of Occupation and Freedom Fights is the only museum of its type in the Baltic States. Located in the building that was the headquarters of the Soviet punitive authorities (NKVD and NKGB-MGB-KGB) from 1940 to 1991, the museum offers a sobering meditation on the country’s troubled past.

On the first floor of the museum, in the office of the former deputy head of the MGB (KGB) visitors can see documents, photos, maps and other objects that illustrate the Sovietization of the country. Meanwhile, on the same floor, exhibits presenting the territorial structure and military organisation of guerrilla units, give visitors a clear idea of the aspirations of the country’s freedom fighters, as well as their daily activities and mode of life. Continuing on the same floor, the exhibition “An Unequal Fight” lays bare the NKVD-NKGB fight against the country’s armed resistance.

Moving to the second floor, visitors can see displays recounting the experiences of Lithuanian prisoners in the gulags, as well as the deportations of Lithuanian citizens. This floor also contains a reconstruction of a KGB surveillance room, containing authentic listening equipment of the time, as well as the furnishing and interior details that were common in the day.

For visitors looking to fully understand the country’s recent history, this museum is a must. The main artery of the centre of Vilnius, Gediminas Avenue runs from Cathedral Square to the Seimas (Parliament) of the Republic of Lithuania. Easily the city’s busiest street, it is home to the city’s National Theatre, a chic shopping center, and numerous other shops, cafes and restaurants. The first half of the street becomes fully pedestrianised on weekends, making it a real draw for tourists and locals. But don’t forget to walk the entire street, there’s plenty to uncover and explore. Not only that, Gediminas Avenue connects to the buzzing hub of Vilniaus Street, where the city truly comes to life at night. 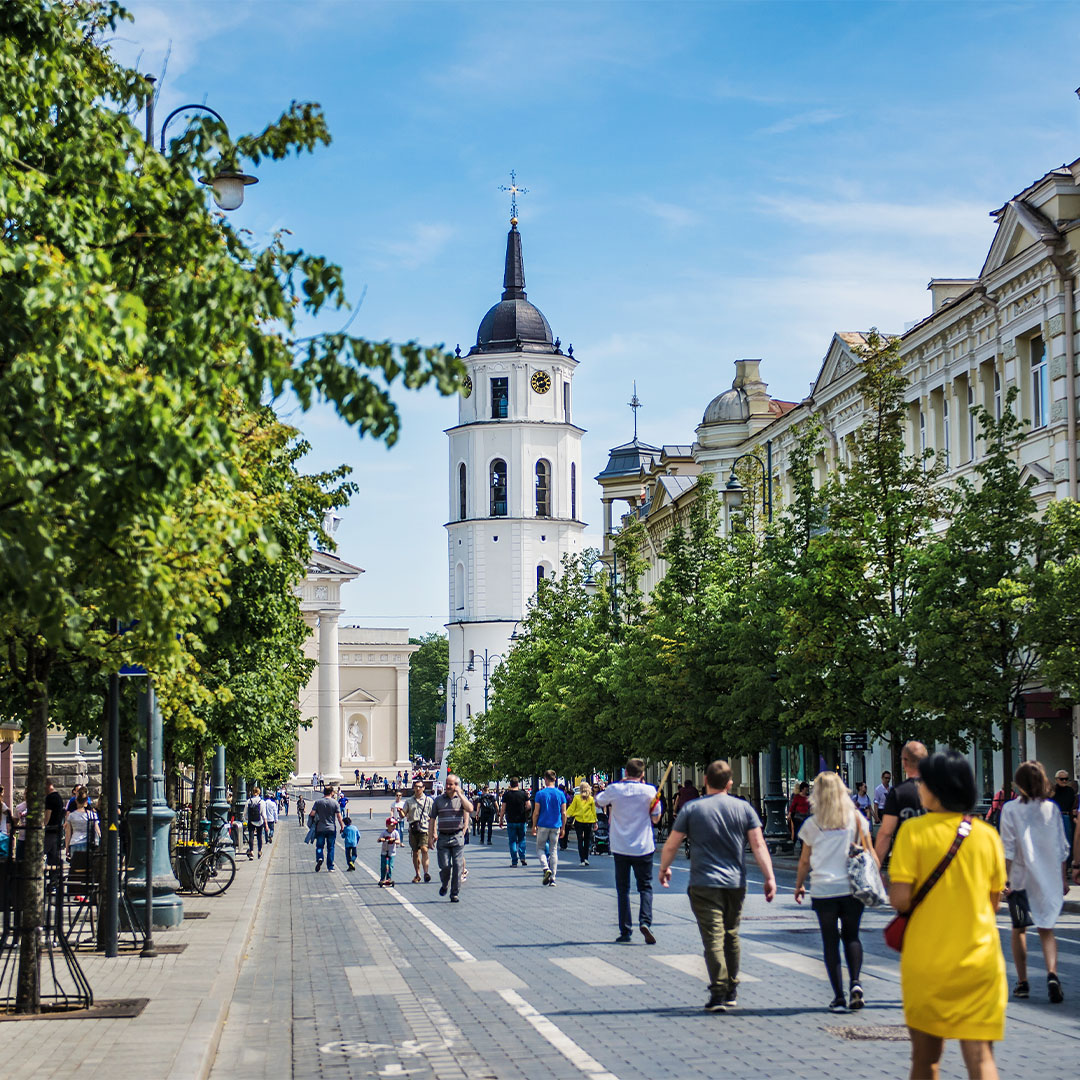 3 days in Vilnius
Add to favourites