Vilnius – the City of Divine Mercy

Pilgrims from around the world travel down the narrow streets of the Old Town of Vilnius and through the leafy paths of nearby Antakalnis to discover the origin of the Image of God‘s Divine Mercy. In 1933, Sister Faustina arrived in Vilnius from Poland to join the order of the Sisters of Divine Mercy in Antakalnis. Over the next several years, she experienced many visions of Jesus, and these became the foundation for the devotion to Divine Mercy. Sister Faustina had experienced visions before, but while living in Vilnius she began to tell her spiritual advisor Fr. Mykolas Sopočka about them. With the help of Fr. Sopočka, descriptions of her visions were relayed to the painter Eugenijus Kazimirovskis from Vilnius, who then painted what became the first Image of Divine Mercy. During the decades of Soviet occupation, the painting appeared destined for historical obscurity. But news of the Image of Divine Mercy and copies of this image gradually spread across the world.

In 2000, Pope John Paul II declared Sister Faustina the first saint of the 3rd millennium. He proclaimed mercy to be the most significant message for the new millennium, and this helped to strengthen devotion to Divine Mercy.

Now, pilgrims can see the authentic Image of Divine Mercy at the Shrine of Divine Mercy located on Dominikonų g. in the Old Town of Vilnius. The shrine is accessible 24 hours a day. Just a short distance away, in the district Antakalnis, is another important location for pilgrims to visit - the House of St. Faustina. Miraculously, the building in which she lived, and where according to her journal she experienced a large number of her visions, is still standing. This is also where she received the Divine Mercy chaplet.

In Vilnius, there are many locations that are connected to the life of St. Faustina and the Blessed Mykolas Sopočka. Pilgrims are invited to visit the most significant sites, which make up the Way of Divine Mercy pilgrimage route. Pilgrims arrive in large number each year for the week of Divine Mercy, which runs from Easter Sunday until the 1st Sunday after Easter, which is known as Divine Mercy Sunday.

Besides the Shrine of Divine Mercy, there are also other sites that proclaim the news of Divine Mercy, as well as received graces. The painting of the Blessed Mother of Mercy is located at the Gate of Dawn Chapel. In the painting, Mary is depicted without the infant Christ and her glance follows every visitor. In mid-November, pilgrims flock to the Feast of the Gate of Dawn. 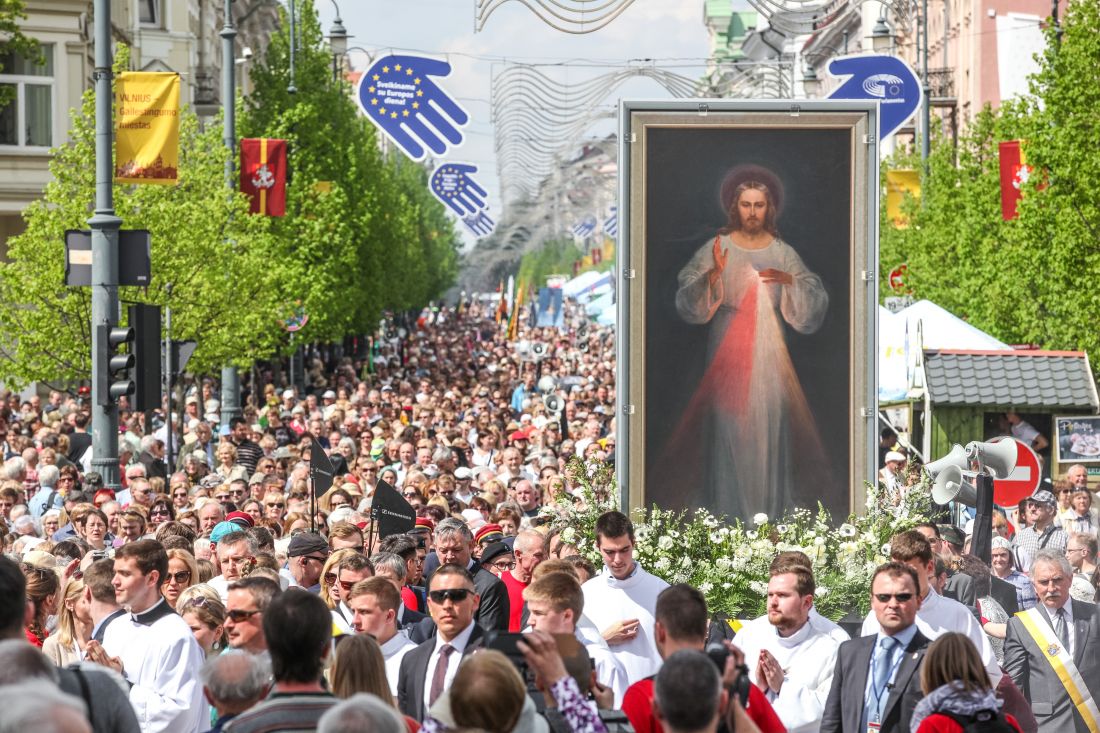