Lithuania was the last European country to be baptised in the late 14th century, yet sacred Catholic sites can be found throughout the country: from one of Europe's first Marian apparitions in Šiluva and the world-famous original Image of Divine Mercy in Vilnius to Baroque monasteries and miraculous paintings of the Blessed Virgin Mary. A tour of Lithuania's religious sites will not only astonish you with impressive sacral architecture but also introduce you to the country's history and the centuries-old traditions of pilgrimage. Discover spiritual peace in these sacred places, surrounded by their special aura and the breathtaking scenery of Lithuanian nature.

The Story of Divine Mercy

The Image of Divine Mercy

The original Image of Divine Mercy can be seen around the clock in the Shrine of Divine Mercy, located on Dominikonų Street in the Old Town. The world-famous painting depicts Jesus wearing a white tunic, blessing people with his right hand, his left touching his heart that radiates light. The rays symbolise the graces that await those who will venerate this image and trust the Divine Mercy.

The message of Divine Mercy

You can take the Way of Mercy pilgrimage route to visit the numerous places associated with St. Faustina and Mykolas Sopočka, her spiritual director, across Vilnius. Pilgrims also come to the city for the annual Divine Mercy week, which takes place every year from Easter to the Second Sunday of Easter – the Divine Mercy Sunday. 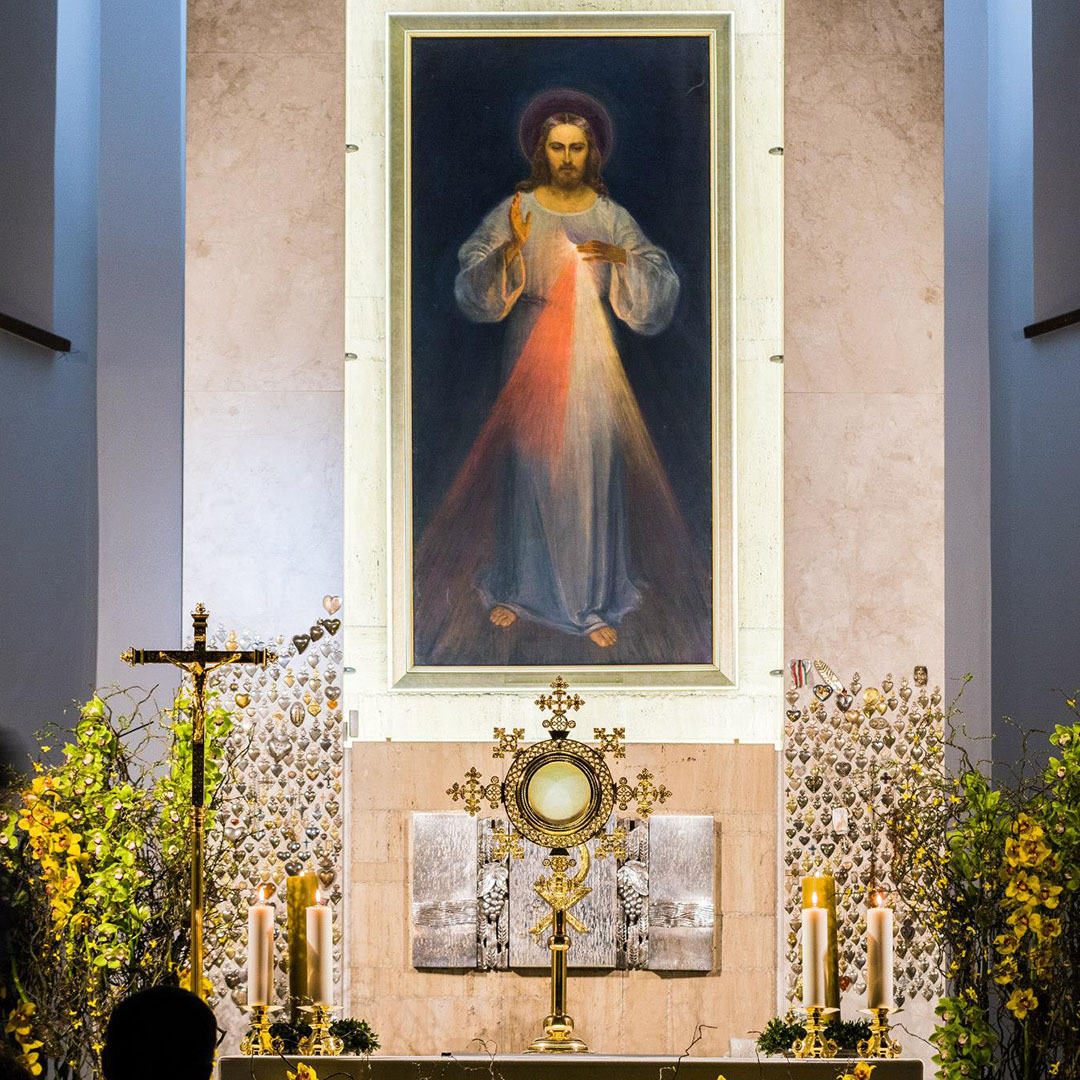 The House of St. Faustina

A short distance away from the Vilnius Old Town, pilgrims can visit the House of St. Faustina. Standing on the grounds of a former monastery, the wooden one-storey building houses the restored cell of Sister Faustina.

Sister Faustina arrived at the monastery of the Sisters of Our Lady of Mercy in the Antakalnis borough of Vilnius in 1933. During the several years she spent here, she experienced dozens of visions of Jesus, which she recounted to her spiritual director, priest Mykolas Sopočka. With his help, Faustina's visions took form in the image of Divine Mercy, painted by a well-known Vilnius artist Eugenijus Kazimirovskis.

Proclaiming Sister Faustina the first saint of the third millennium in 2000, Pope John Paul II noted that mercy is the most important message for the new century. Today, pilgrims come to Vilnius to express their trust in the mercy of God. 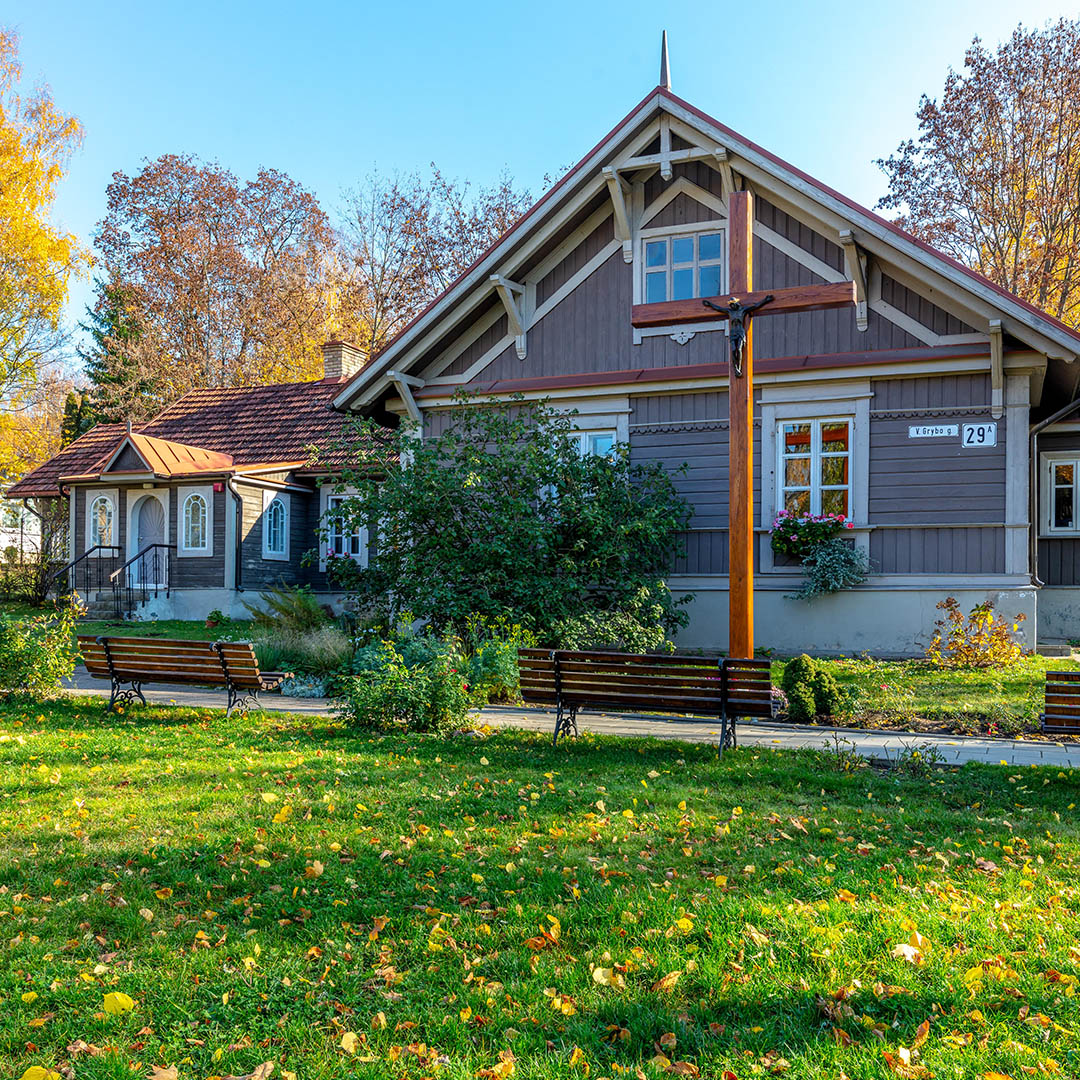 Desecrated but never destroyed, set on fire but never burned down, the Hill of Crosses is a potent symbol of faith, hope, and freedom. And for pilgrims, it is another must-visit location in Lithuania. In 1993, Pope John Paul II prayed at the Hill, and later mentioned this sacred site in many of his sermons and speeches. After his visit, the Pope sent a crucifix that was placed at the Hill, and today believers begin and end their pilgrimages at this spot.

Covered in thousands of crosses, the Hill offers insight into the authentic Lithuanian tradition of cross-crafting. This unique type of Lithuanian folk art was named part of humanity's intangible cultural heritage by UNESCO in 2008.

While Condé Nast Traveller includes this site in the Top 20 creepiest places in the world, for locals and visitors alike, this is a place of hope, enlightenment, and reflection on Lithuania's historical and cultural traditions. It is also the site of the Feast of the Hill of Crosses, a religious celebration that takes place on the last Sunday of July and attracts thousands of pilgrims. 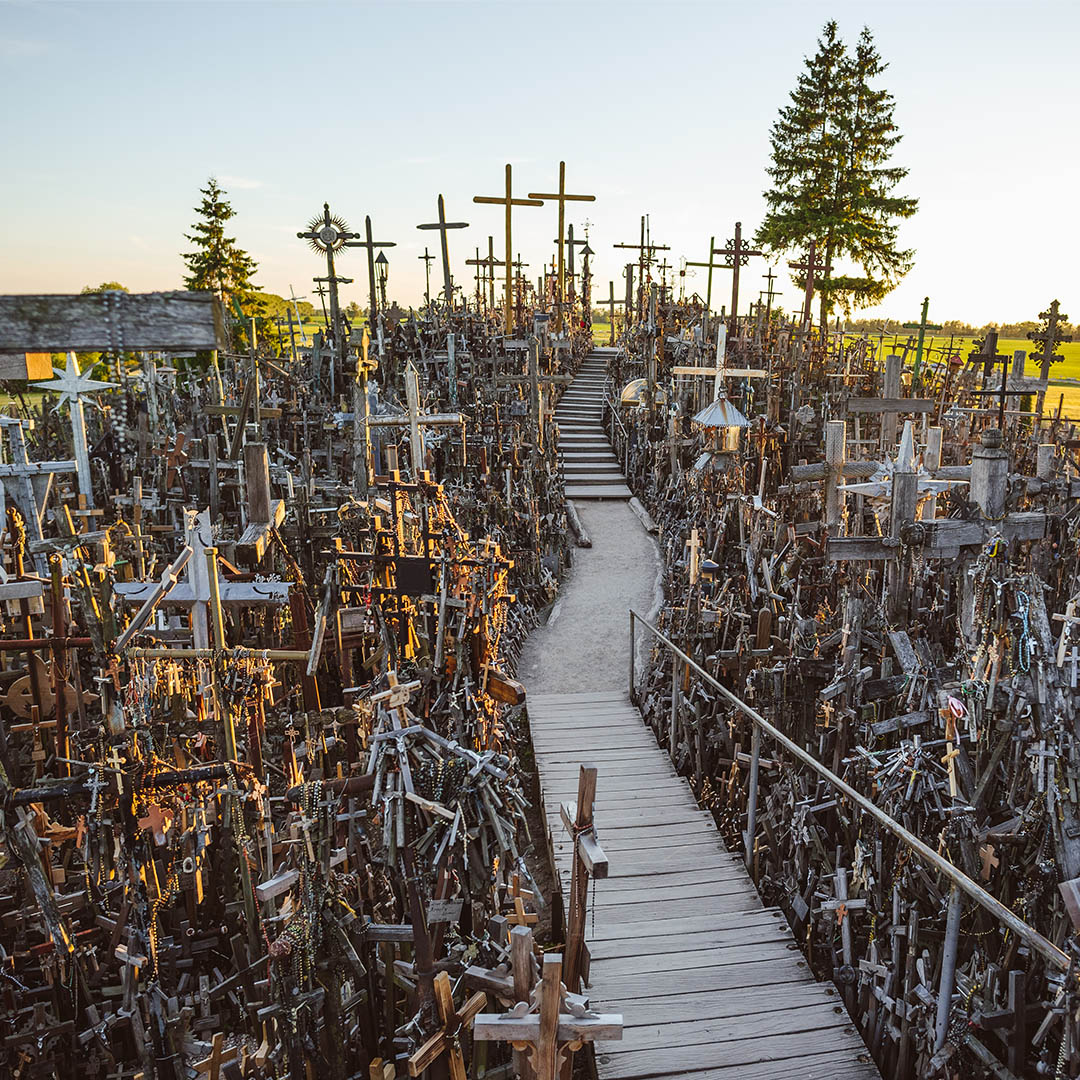 Šiluva – the place of the apparition of the Virgin Mary

If asked about Šiluva, most Lithuanians would tell you that the town is one of the country's most important spiritual centres. It is also one of the first sites of a Marian apparition in Europe.

Šiluva is a place to find spiritual peace, experience centuries-old pilgrimage traditions, and admire its impressive sacral architecture. The red brick Church of Šiluva, built in the 18th century, is one of the last monuments of late Baroque architecture in Lithuania and has preserved its interior décor nearly unaltered for more than two centuries. The believers come here to venerate the miraculous Image of the Blessed Virgin Mary with the Divine Child and pray at the Chapel of the Apparition. Standing at 44 meters in height, the majestic building was designed by architect Antanas Vivulskis, who also created the monument of the Three Crosses in Vilnius. The altar at the centre of the Chapel was built on the stone where the Blessed Virgin Mary appeared in 1608. The biggest religious celebration in Lithuania – the Šilinių Feast – occurs in Šiluva on the 7th-15th of September. 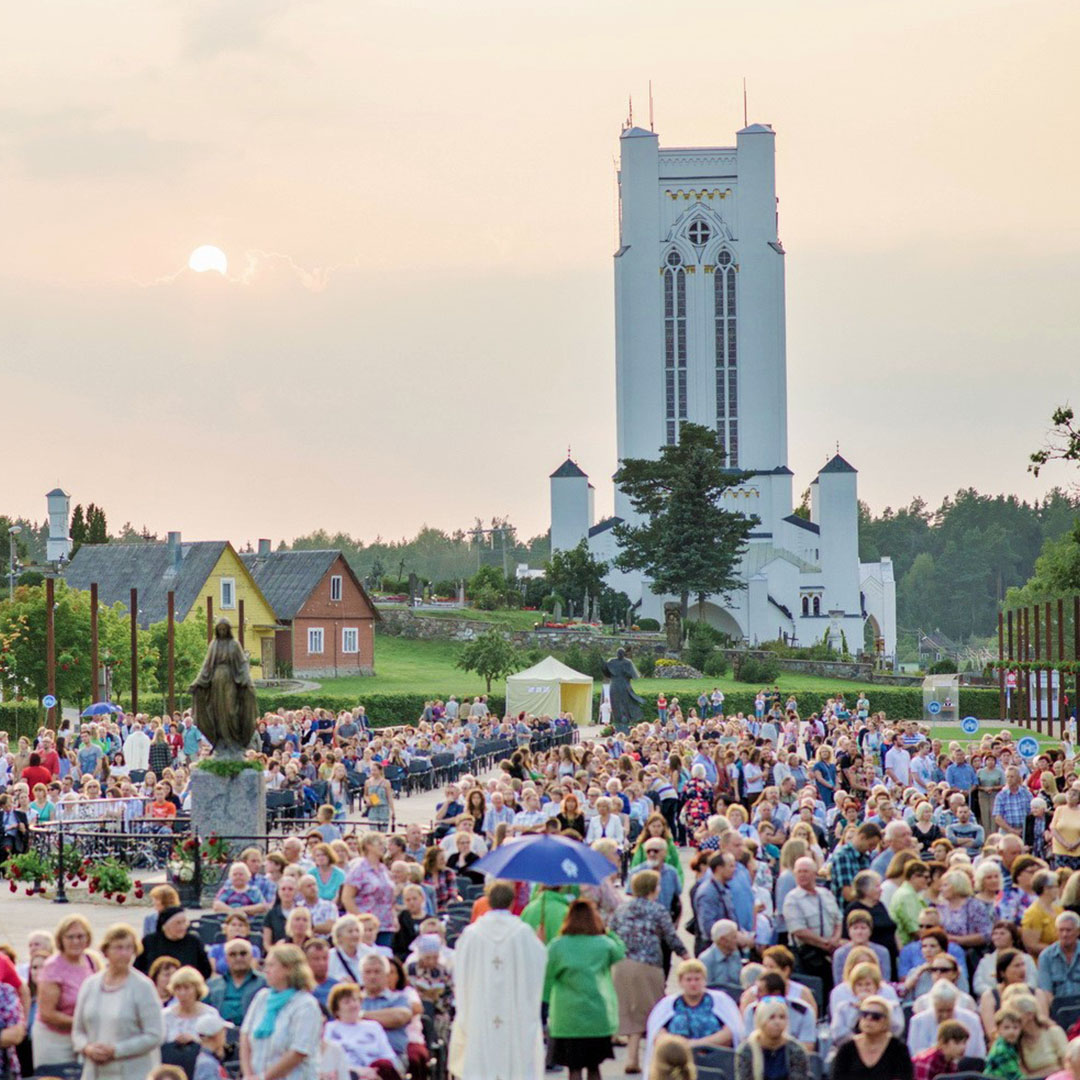 Surrounded by scenic nature and numerous lakes, Trakai is Lithuania's historical capital and the former home of Lithuania's Grand Dukes. The country's rich history is reflected in both the Trakai Castle, standing on one of the lake islands, and the 15th-century Basilica of the Visitation of the Blessed Virgin Mary. Displaying a mixture of Gothic and Baroque architectural features, the shrine was granted the title of basilica in 2017. Throughout the centuries, it has remained the spiritual centre of Trakai, never closed by the Soviets and always used only for religious purposes.

The Trakai Basilica boasts a miraculous Image of the Mother of God that has been venerated there for six centuries. 400 votives are currently placed next to the painting, gifted by believers thanking for the miraculous graces that the image had granted them. Three centuries ago, this painting was coronated by the Pope, making it the first painting in Lithuania to be officially crowned. The original painting arrived in Trakai as a gift from the Byzantine emperor to Lithuania's ruler – Vytautas the Great – on the day of his baptism. Over time, the picture was repainted and altered, but was always venerated by the people of Trakai and the surrounding area – not only the Catholics but also the local Orthodox and Muslim religious communities.

Numerous pilgrims from Lithuania and abroad visit the Basilica every year. The annual Trakiniai Feast is a celebration in September and features a 30-kilometre-long procession from the Gate of Dawn in Vilnius to the Basilica in Trakai. 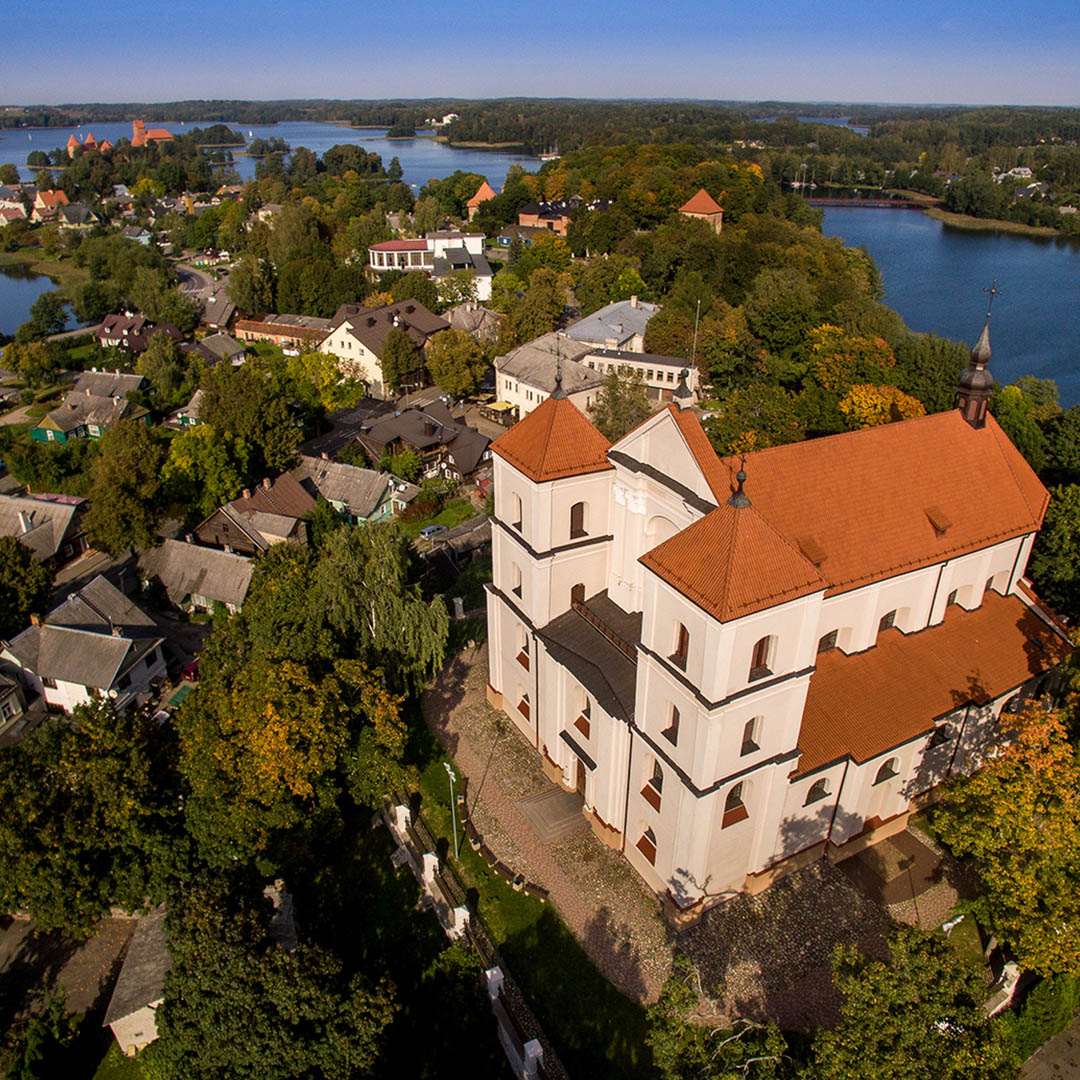 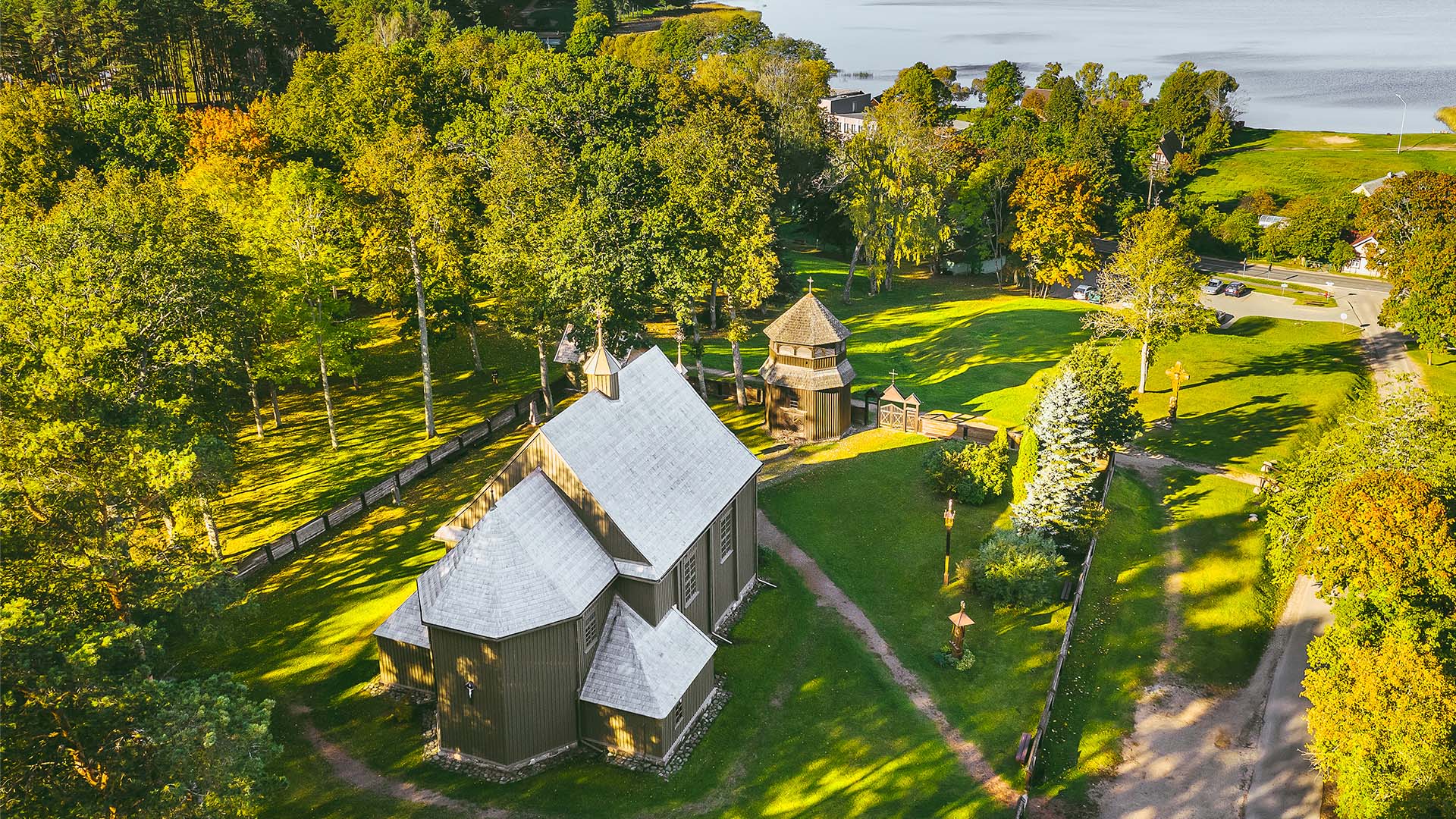 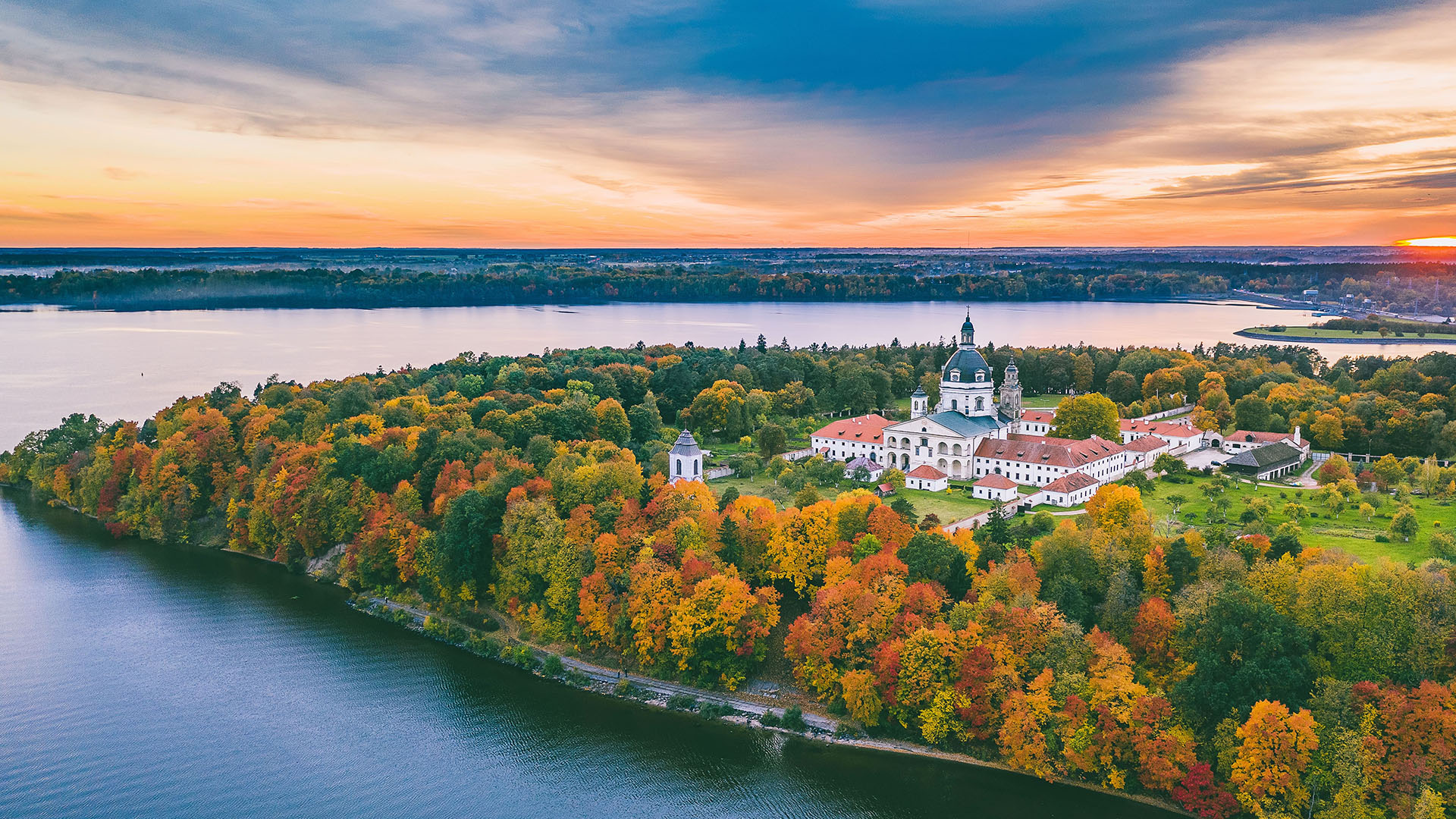